- Depending on the type of speed controller, it can be combined with the motor for various purposes such as speed-control,braking, slow run, slow stop, etc.

- Built in T.G. (Tacho Generator) to control the feedback. Thus, even if the power frequency is changed but the rotatingnumbers does not change.

- The speed control motor with an electronic brake also has a non-excitation run type of electronic brake. Even if the power is off, braking is operated to maintain braking of a load.

- Speed control motors are consisted of the induction motor the reversible motor and the speed control motor with an electronic brake which are small AC motor. The applicable motor should be selected for appropriate uses.

① Selection of motor and controller
- Is speed control needed only?
- Is instantaneous braking needed?
- Is maintenance of braking power needed?
- How much is the output of the applicable motor?
- Are the slow run, slow stop runctions needed?
According to the above conditions, the types of speed control motors and speed controllers are selected.

⑤ Selection of the motor
- The motor is decided by the required torque TM, rotational frequencies NL ~NH and the torque-number of rotations curve (hereafter, N-T curve).
- In the case of the AC speed control motor (Fig. 1) of the curves, the moment curve (i curve) selects the motor below the limit curve. (Even in the area above the limit curve, if the surface temperature of the motor is less than 90℃, then there are no problems with use.) 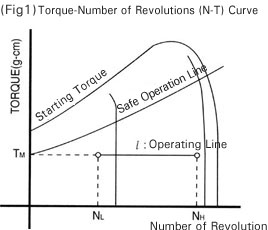 With single direction rotation of the belt conveyor, change the speed of the item being transported to 1m/minute, 2m/minute, and 4m/minute. 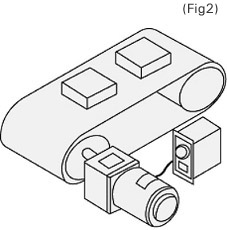 - Rotation is in one direction and there is no holding power. Therefore, the induction motor is selected.

② Revolutions of output shaft of gearhead
- The number of rotations of the gearhead shaft when the belt conveyor speed is 1m/minute.

- Number of rotations of the gearhead shaft when the belt conveyor speed is 2m/minute.

- Number of rotations of the gearhead shaft when the belt conveyor speed is 4m/minute.

③ Gear ratio
The gear ratio is calculated using the higher number of rotations of the gearhead.

⑥ Selection of motor
- From the N-T curve of the induction motor, it can be seen that the K8IG25NC-S motor and the K8G100B gearhead can be combined to use. However, in such a case, make sure that the inertia load should fall within the specification of the selected motor.

① The principle of speed control 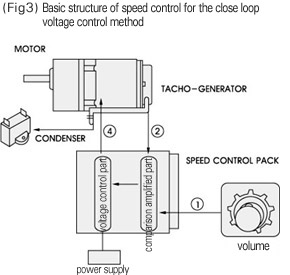 - If Tacho-Generator changes the voltage that is proportional to the rotations, make comparison between the number of rotations of the motor and the voltage preset by the volume.

② Primary voltage control by close loop
- The relationship between the torque of the induction motor and the number of rotations is as follows (Fig. 4) when the applied voltage (primary voltage) of the motor is changed. 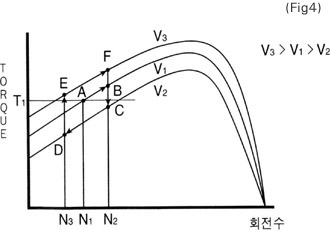 - The current voltage is V1, the torque of the load is T1 and the number of rotations is N1. That point is A. Speed is increased to B and when the voltage is changed from V1 to V2, then it moves to C. 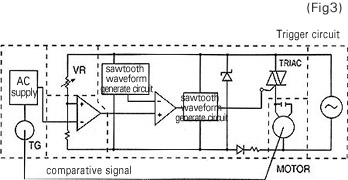 - The speed controller is explained in (Fig. 5).
- Number of rotations of the motor comes from the Tacho-Generator through feedback voltage through the rectifying circuit.
- The difference between the selected voltage of the speed controller which was controlled in the VR and the feedback voltage is amplified in the comparative amplifier.
- A trigger signal is generated from the sawtooth waveform which comes from the sawtooth waveform generator, comparator from the comparative signaland triac from the trigger circuit.
- The angle of the triac is controlled with the trigger signal to control voltage in the motor.
- This makes the number of rotations of the motor constant, thereby controlling it. Refer to (Fig. 6). 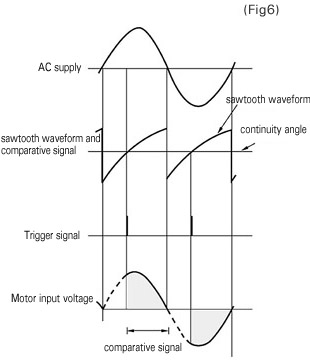 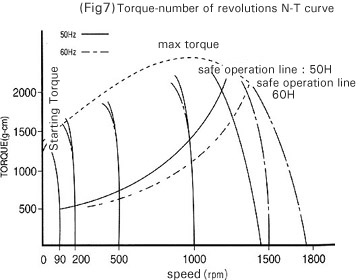 - When the temperature of the winding section is 120℃, the surface temperature is about 100℃. Therefore, 90℃ is the sufficient value.

③ Range of use according to instantaneous braking

- Instantaneous braking uses direct current which is half-wave rectified current in the motor thus causing the temperature of the motor to rise rapidly.

- In the N-T graph, the limit curve is in the case of continuous operation, therefore, if instantaneous braking is applied often, the range of the limit decreases.

- For instantaneous braking, temperature rises by frequent braking, thus care should be taken so that the surface temperature of the motor does not exceed 90℃.